Heard there was some filming going on in Hawley Woods, but haven’t been over that way recently.

Anyway, latest Avengers flick has been filming there and set to move to Bourne Woods (of Gladiator & Robin Hood amongst others fame). Big bangs are expected.

Just a promote for those Potter fans out there or in your life.

A series of PDF guidebooks for fans available for a modest price that describe in detail the locations used to shoot the Potter films.

As some may know I frequent Swinley a fair bit for mountain biking and got to see some goings on there for the films, hence a few posts here about it. Result has been I was asked to provide some assistance with some local information and a photo to the author of these books and the third book has some detail on Swinley (or actually as a supplement in more detail as for people looking to check out locations it’s going to be near impossible to identify the locations unless you know the place and saw where they shot the stuff, like me).

Reading through, as a local one thing I didn’t know is very nearby to Swinley is Harry’s house (round by Martins Heron), or at least the original one. The locals asked too much to film there after that so Warner built a replica of the street on the studio backlot!

A little credit in there too. Woohoo, name in print! of sorts :). A thanks to Chas for producing these books and the impressive efforts gone into to researching it.

Location signs up on the roads approaching Swinley recently, saying (I think) ‘DBL‘.

Haven’t seen any in Swinley or pointing into the estate, but at least directs down Nine Mile Ride towards The Look Out.

Also, the other week, there was a sign on the junction of Shere Road where the A25 turns right up the hill towards Newlands Corner that simply said ‘BASE‘, pointing towards the hills. A typical base camp sign for a location. Didn’t have time to check it out.

Update: Not sure if it’s related but further into the hills on the back roads towards Peaslake are signs up saying ‘MAYDAY‘. Looking up the location of the Aldershot film location, Google has this capture from what must have been a previous set up. 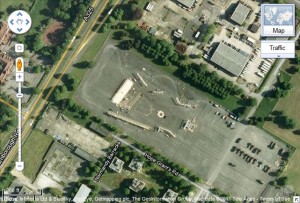 And then as a frequent haunt of mine, checking out Google’s view on Swinley and seems it caught not only a plane going over but also the green screen stuff that was being built there during the Harry Potter filming back in 2009. 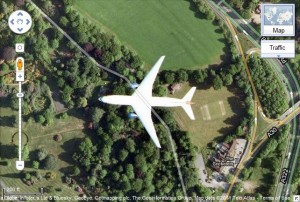 Again, not looking for these, it’s just I drive past these places and the route home takes me past a now common spot for filming in Aldershot. This time lots of scaffolding put up, some sort of wooden structure being built and they’ve now put screening up to hide it from the road.

Place was used in the past for a Bond film apparently and other things I’m not sure about.

This time the signs up are for HCZ Unit. HCZ = Film company? Or code name for the film (or TV show)?

Haven’t got a photo myself, but @herodian has a couple